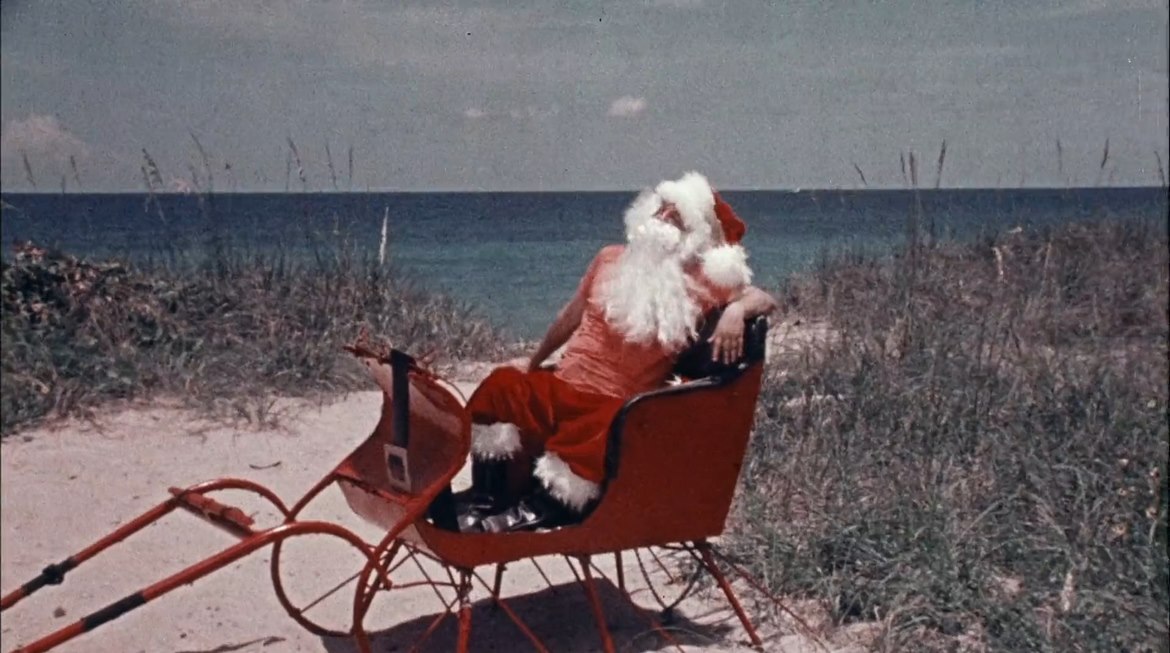 My little intro might lull you into believing that there might be something of value here. Sadly there is not. Santa and the Ice Cream Bunny is one movie about Santa being stuck on a beach in Florida and a movie about Jack and the beanstalk mashed into one. Hell is more than just pain and getting hurt, it’s also the immense boredom found in this movie.

Santa wakes up on his sled. It is stuck in the sand. It is hot, we know that because Santa repeats the fact that it is hot in Florida 10+ times throughout the movie. Kids come and try to help by getting a gorilla (yes a gorilla), a pig, a horse, and a sheep to pull the sled out. Nothing works and Santa gets very annoyed. To fix this he tells the story about Jack and the beanstalk which really relates to his predicament.

Jack and the beanstalk is a cut down version of a previous movie made by Barry Mahon. It’s a semi-musical about Jack and the beanstalk. The acting is theatrically stale, the quality of the shots is alright and it’s 100 times more engaging than the main storyline of the film. This does not by any stretch mean it’s any good.

Back to Santa. It’s hot, he tells us that it is hot, repeatedly. Then from nowhere a siren is heard. It’s the Ice Cream Bunny! Riding a red car with all of the kids. He drives, drives, and then drives some more. After about 5 minutes of watching him drive through an amusement park, he finally comes around. Then he helps Santa by simply standing in front of him and then giving him a ride and magically displace his sled. The end, my eyes bled, my ears had fallen off and I had lost my last brain cell.

Santa and the Ice Cream Bunny is an excellent trial of manhood. It is the ultimate test of endurance, patience, and sanity. Is this a movie I’d recommend? Is it so bad its’ good? Absolutely not, I watched it so you don’t have to. You are welcome!