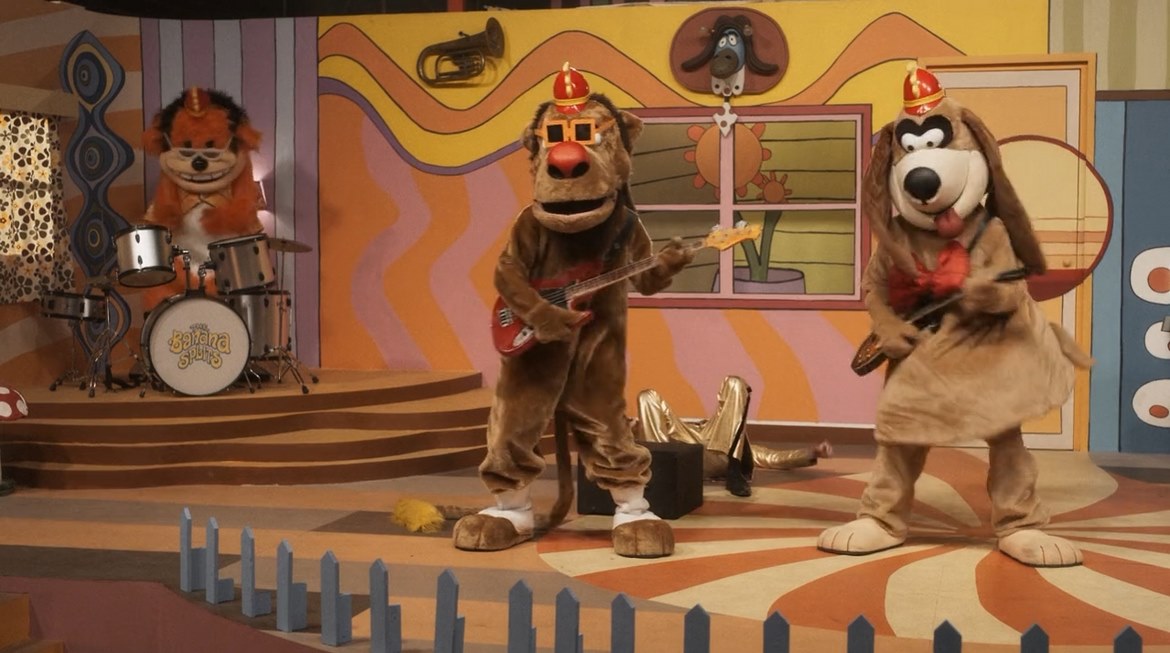 If you’re around 50 years old, you might remember a Hanna-Barbera children’s television series, named «The Banana Splits». Let me simply state: This ain’t that!

We open with the Williams’, the youngest son, Harley is a superfan of the «Splits», which his dad, Mitch thinks he’s too old for.
Harley’s older half-brother Austin, the token stoner (or is that tokin?), loves his little brother, and together with his mother Beth, and his stepfather Mitch, take Harley to a taping of the Banana Splits show for his birthday.

We’re introduced to what I see as the real villains of the movie, an Instacouple who seems to think that the world revolves around live streaming everything that happens, and the number of followers they have, and a helicopter dad who wants his disinterested daughter to be famous, and will do anything to make it happen.

The Banana Split taping is as insipid and inane as one would guess, being a survivor of ye olde times.

We also get a look behind the scenes a bit, the new Vice President of programming wants to cancel the show, the inventor/builder of the Splits, who we find out are robots with questionable programming, the Splits’ human sidekick, Stevie is rather unhappy, the show hostess Paige and her assistant Doug seem to either want to die, or to get a better job.
The taping of the show end and some of the public are lucky enough to meet the Splits!
Stevie the human sidekick has a close encounter with a prop from the show, a giant lollipop, that really puts the plunge in plunger!

I know I said that most of the adult humans seem more villainous than the robotic Splits, and that’s what I really think.

Even if the Splits do all the killing.

A couple of memorable scenes though:

When the instacouple come over a stage from the show, where they tape magic acts, instaguy proposes to instagirl, and they become engaged.
Enter a Split, who shoves instaguy into a box designed for cutting people in half.
And proceeds to do so, with the gore one could imagine involved.

Leaving instagirl just sitting next to the box, holding instaguy’s hand.
Helicopter dad runs around with daughter in tow, trying to get her «discovered» by the show’s producer or anyone else that matters.
Failing, obviously.
And after a while, coming face-to-face with a Split, holding a can of something flammable, and a lighter.
Fire meets face, fire wins.

All the kids are trapped by the Splits, but due to Harley’s love for his favorite Split, Snorky, Snorky turns out to be able to resist their questionable programming and helps by attacking the other Splits.

Not before the VP of programming literally gets torn to bits though.
A fate most welcomed, I’d say.

Instagirl comes face-to-face with the builder/inventor of the Splits and discovers that he’s planning to introduce a new Split, Hooty, and suffers a mental break, seemingly taking on the persona of this new split.

In the end, all the kids are saved, Beth, the mom, and her two kids are safe, and meet up with Mitch the dad.
But due to him cheating on her, (Didn’t I tell you that humans seem the villains?) she demands a divorce.
In closing, we see an ambulance driving away, with Mitch running behind it.
We hear a «vrooooom» sound, and the surplus of remaining theatrical gunge is thrown onto the asphalt, as we see Mitch getting run over by the Splits’ car, driven by instagirl/Hooty, loaded up with the Splits’ bits and pieces, setting the stage for a sequel!!

I know I’ve probably judged this movie a bit harsh, and for that, i’ll say:

It’s worth a watch.
I give it 7/10 salty bananas.
And I do hope they make a sequel.
But to me, it was a comedy, as the real horror was many of the adult humans.
Though, that’s how I see real life as well.
You’ll find nothing as evil, as another human.

This review was written by my good friend Serry

Anna And The Apocalypse (2017) – Zombiecal in Christmastime