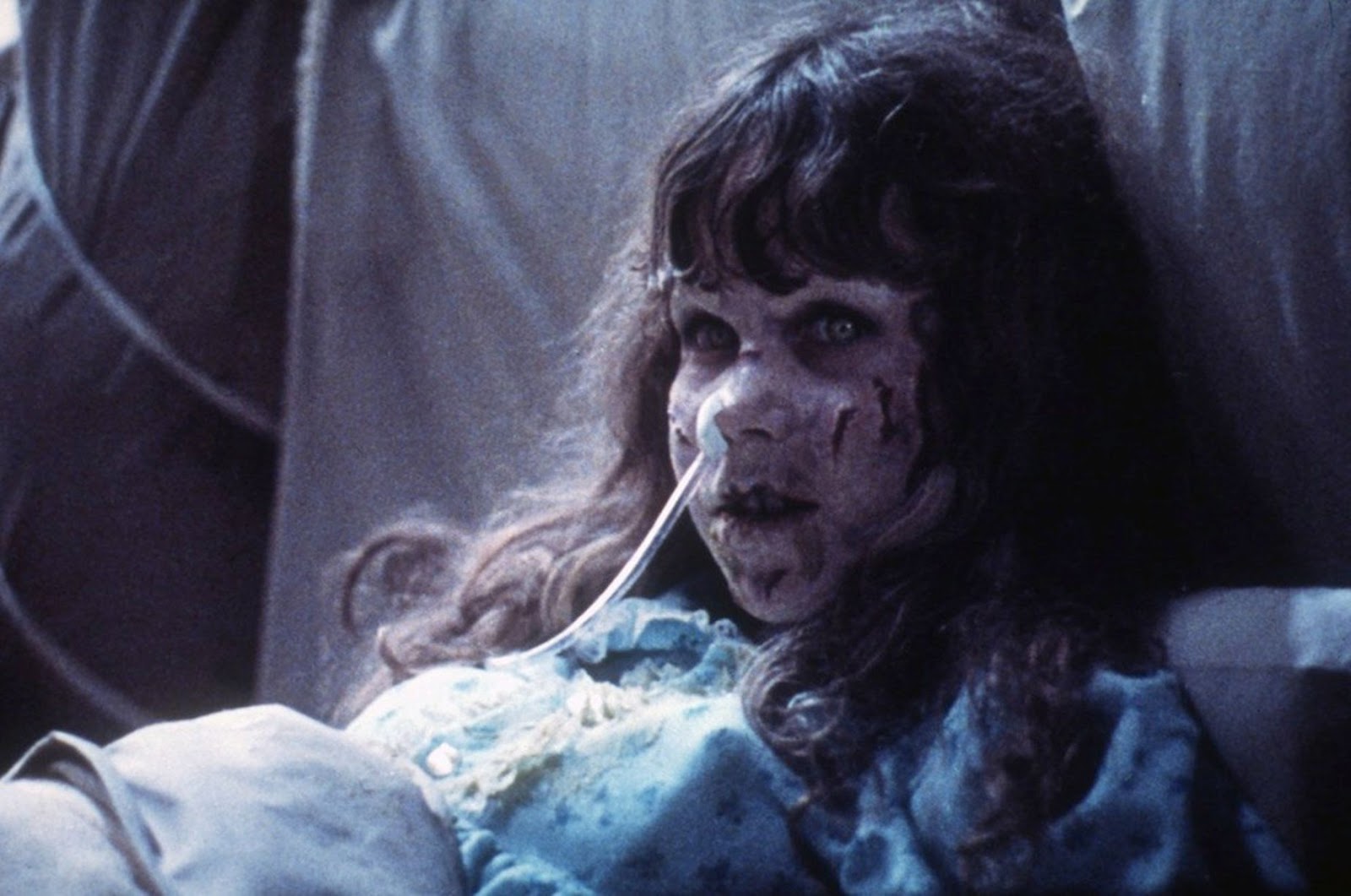 My interest in horror started when I, as a 12–13-year-old boy watched The Exorcist late one night when I was home alone.

It did not scare me, as such. Or at least not that I can remember.

Funny story: I watched Gremlins 2: The New Batch when I was around 10, and the gremlin that gets turned into electricity scared me shitless!

I had nightmares about the electric gremlin for years, and I was afraid of the electrical outlets in our house as a result.

At the end of the hallway that ran the length of our house, there was an outlet that I was certain the electric gremlin would come out of and kill me.

That fear lasted until I was around 15.

But The Exorcist? Not at all from what I can recall.

It did however get me interested in horror, as well as demons, possessions and the occult.

That is also a preference evident through all the horror I enjoy, the supernatural, demons, possessions and anything related to the occult.

I find it exceedingly difficult to overlook any factual errors in any specific piece of media, say if a film contains demonic lore from a historical tome about demonology and either accidentally or wilfully gets something wrong, I find this detracts from my experience.

Obviously, I understand that not everyone has my special interests, nor do they perhaps love research into the occult as much as I do. But when it is a matter of looking something up in a book, or nowadays, online, and writing it down or printing it out and putting it into a folder for further use, I mean, c’mon! It’s not rocket surgery!!

That is not to say I don’t enjoy movies that happen to have factual errors, because as in life, perfection is near impossible to reach.

Some pieces of media in the horror genre that have left an indelible mark would be films like: The Devil Rides Out from 1968, Sheitan from 2006, Unholy from 2007, Blood Creek from 2009, the Exorcist series (obv), the Dabbe series from Turkey, Noroi from 2005, Occult from 2009 and Cult from 2013. (Not an exhaustive list at the very least.)

Works of fictional literature, like: At The Mountains Of Madness, Dagon, The Temple, The Nameless City, The Call Of Cthulhu and many others by H.P. Lovecraft.

Works of historical literature like The Lesser Key of Solomon, Three Books of Occult Philosophy by Agrippa and others.

And lastly, works of historical/modern literature that are entirely removed from the horror genre, but for me, get my imagination flowing and my mind calmed to a point where I can enter, and walk through the real horror in life.

The deep inner experiences of my own mind.

The Rules Or Secrets Of The Naqshbandi Order by Omar Ali-Shah, and Divan-e Shams-e Tabriz by Jalaluddin Rumi.

Now, let us get to the nitty-gritty.

What do I think about horror?

I find it an utterly enjoyable form of media, as it delves into perhaps the deepest reaches of our very being, the very core of the human condition. Fear. The upsetting. The “gut-reaction” that just happens within us. Something animalistic, if you will.

I am rather emotionally detached and whether that’s a problem or a boon, I cannot say. It merely is.

I rarely, if ever, get scared by horror media nowadays. In fact, I cannot remember any time within the last 20 years where I found a horror film so scary that I even got a little uncomfortable. Though that could be blamed on age. (No, not really.)

I think that is why I seek out the more obscure renderings of the genre. Not to say that Hollywood blockbusters are unable to manage good horror but quite a lot of what is presented is very rote.

I find it refreshing to stumble upon a non-American piece of horror media, like The Dabbe series of films from Turkey. It is a different venue, both culturally and mythologically and forces me to enter the mindset of trying to figure out what the producer and director want the viewer to experience. It forces me to leave my preconceptions at the door, so to speak.

And I might be weird, but I enjoy going into things without preconceptions because I feel this detracts so much from what you are trying to view and experience.

It’s as if you show up at a friend’s party, your head filled with what you want out of the night, what music they should play, what food they should have, what people should be there.

It’s like looking at a painting and getting angry at the artist because they didn’t paint it the way you wanted it to be.

Whenever I watch a horror film I tend to side with the demons, spirits or other “eeeevil” characters.

In all my 40 years, in all the horror movies I’ve ever seen, I think I can count on one hand the times where I did not at least ponder why humans are as evil as they seem to be.

Let’s take The Banana Splits, which I reviewed, or at least attempted to review here on this blog a while back.

The “eeeevil” robots, in my mind, were not evil at all! They were merely trying to survive in a hostile situation, being told by their creator: “The show MUST go on!”

What else could they do?

Whereas most of the humans in the movie, showed how disgusting, evil, malignant, arrogant, selfish, egotistical, and full of horror they were.

Granted, this could be something I hooked onto/reacted to, because I am autistic, and I often feel like a robot lost in human society. So many unwritten rules that I lack the programming to compute with.

To understand the subtleties, the unfathomable whims, the unspoken words of neurotypical people. That, to me, is the true horror, in most films. (And real life. But don’t tell anyone.)

What do I find interesting in horror over other genres?

I think it stems from my long-time interest in psychology. The raw states of human experience.

To me, fear, even when it is acted, is one of the rawest, most pure states of the human experience.

Love can be so many different things, to so many people.

Comedy and humour can be so very different.

Fear, however, is like the one true crossroad, that most, if not all people have to take a stand on. Have an opinion on.

Know or figure out, how close to the crossroads of fear, they can comfortably stand without going too far.

Whether it’s a fear of other humans, fear of a deity of spirits, fear of objects or creatures. Almost everyone has had to take a stand or think about fear.

And I do not enjoy scaring others in real life, nor do I enjoy when people try to scare me, so watching people portray fear and horror in a movie is the next best thing.

As I mentioned earlier, I am rather emotionally… Well, I said detached, but I don’t think that’s the right wording.

Î don’t let my emotions run away with me or take control. I am in control of my emotions, not the other way around.

It might appear on the surface though, to others, that I am emotionally detached, or maybe even lack emotions. And I sometimes catch myself using the same words, simply because it can be such a foreign concept to a lot of people.

From conversations with others, it seems to me that a lot of people, I don’t mean to say, suffer under, or struggle with their emotions.

But it seems that emotions are such an important part of their life, whether they want them to be or not, that it can seem all-encompassing to someone like me, where emotions take the second stage over what I hope and strive towards, rational and empirical thought.

And this dichotomy between emotions being so important for others, and less so for me, is something I see reflected very well in the horror genre.

I guess it’s more philosophy and what some would deem pointless pondering, but I have to say, I do not care!

I enjoy it therefore I do it!

I think that is why I consume media of the horror variety more than other genres, not that I don’t enjoy romcoms, dramas, sci-fi and more. I really do!

It IS, in the end, about enjoyment.

I prefer to be engaged mentally and intellectually with what I consume regarding media of any type so I find slightly less enjoyment in what I see as mindlessly stupid media. Santa Claus and the Ice Cream Bunny is a movie that comes to mind.

That one movie was rather painful to experience, not because of any specific thing I can point to, but… Because I was unable to… I don’t know. I was just unable to! Watched it though I did.

What do I get out of consuming media from the horror genre?

I seem to be rather proficient, if such a phrase can be used, in falling down the Wikipedia rabbit-hole.

I can watch a movie, read a book or have a question about an actor or writer, look it up on Wikipedia or the gargle (Google) and two or three hours later, I wake up as if from a daze with a fount of new, relatively useless information.

I don’t know if I process information differently from other people or if information-gathering is just another of my ever-expanding list of special interests.

And yes, I do gain information from consuming media, I don’t really see a difference between watching a movie or reading a book or newspaper. It is just different types of information and needs to be broken down and filed in separate sections of my mind. (No, I do not have a “mind-palace”.)

If it’s fiction, you can still glean information relevant to real-life from it, but you must be careful with it, and file it in the “fiction” folder.

Information and news go into the “factual/real-life” folder.

Real-life is very different to fiction, and you would do well to keep the two separate.

I wish I had an eidetic memory, but as it is, I do well enough with what I do have.

I can generally remember if I have ever seen a movie or read a book before. I might not remember the name of the movie or book, but I can usually figure it out relatively quickly.

This does not prevent me from wilfully rewatching a movie, several times though. Some movies just deserve to be rewatched over and over, like Occult, Cult and Noroi by Koji Shiraishi and the Dabbe series by Hasan Karacadag.

I cannot really pinpoint anything beyond this, as something I get out of consuming horror-related media, and it’s not for lack of trying.

And after having read through what I have written here, I can say that this gives a coherent and structured insight into how I, an autistic person, think about and view the horror genre.

(With certain liberties and tangents.)

The story of a fart and a punch