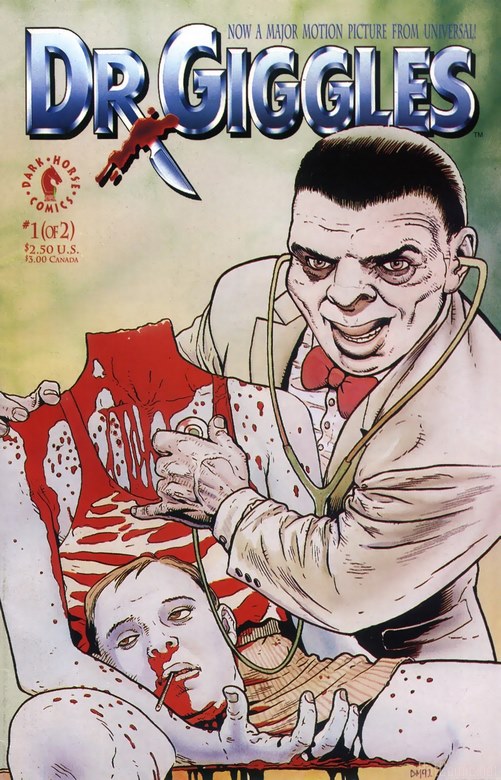 When Dr. Giggles premiered it also came with a comic! I am not a comic person nor do I really know how to properly review them. But hey, there’s a time and a place for everything! So let’s dive into the gross and over the top world that is the Dr. Giggles comic book! (Now in two volumes!)

This is sort of a retelling of the movie but with some added liberties. First off you are served an extremely condensed version of the events of the film. The characters look different (someone even got their race changed) and the plot is a lot jumpier. If I were to read this without the context of the film I would just enjoy the interesting death scenes and disregard the plot since I wouldn’t get half of it anyway.

The main character, Dr. Giggles is represented in full horror. The comic really managed to make his already unsettling appearance into something even more distorted. Some scenes are true horror and it warms my heart to see. The one thing that irks me though is the way that many characters look alike. It can be hard to differentiate them at times. With the exception of the side characters which are all a bit over the top (which really suits this format).

The story told in the comic follows the movie format rather well. Divided into two volumes, taking some liberties it still stays true to the source material. You are treated to a gorefest that’s a bit all over the place and extremely compact. I would say if you enjoyed the movie then by all means read the comic. As a comic, it’s well made graphically but not as well plot-wise. I really do not what to really add to this review other than “it’s all-right I guess”. Enjoy to your heart’s content!

Setting up the horror atmosphere

Analog horror – Something is not right