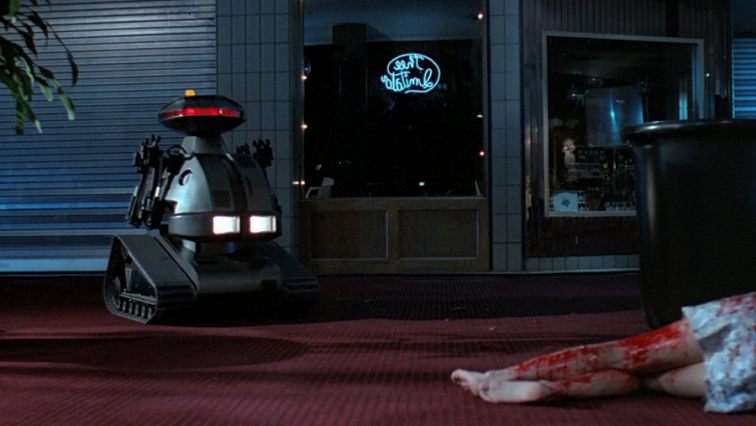 I enjoy cheap and simple 80s horror as much as the next guy. All the cheesy effects, the pretty crappy acting and of course the dumb premises. Chopping Mall manages to deliver on all of these fronts but rather poorly.

It’s predictable, has poorly made 50s type effects and the acting is God awful at times. But the movie knows this and knows just how much of a B-movie it really is. You’re not supposed to take the movie seriously and I sure got that message right off the bat. The problem is though, the acting is so bad at times it feels like a school project kind of movie. I was even expecting them to all Ants on us and stare into the camera but luckily it wasn’t that bad. Oh there’s also a lot of boobs and underwear scenes cause you know, horny teens and what not. I am all about a good boob but it really doesn’t do much for me when the acting is so stilted.

As a mall buff this movie makes me happy on so many levels. The 80s mall aestethic is all over the place and the general feel of the location hits me hard! Of course there’s also a slew of bad quotes and “cool guy” stunts that just adds to the cheesy goodness.

Here’s my verdict and tip. Grab a few friends, drink beer and laugh at the absurd effects and stupidity of all the characters. Then drink just enough that the acting doesn’t come across as a stilted mess and you’ll have a nice evening with this cheesy “gorefest”.