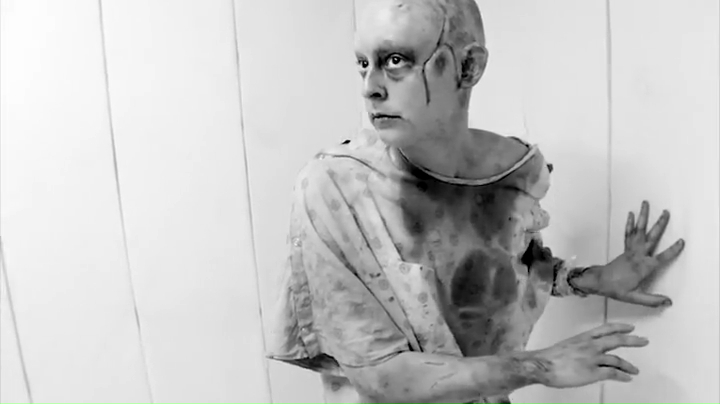 This is the first time a shock horror has left me… Well shocked. I am not too keen on operation and I am even less keen on well made operating scenes. This one had a lot of that. They managed to give me a bloodshock so to speak.

The story is shown without words. A man wakes up in a padded room, taken to a doctors chair and then he gets his tongue cut out. Afther this he is put back into his cell. The demented doctor is harvesting his endorphin filled blood to get high off of. At least that’s what I think is going on. As gruesome image after image flashes in front of me to an extent that numbs your senses a story appears. A gruesome story about pain, pain and even more pain. There is also some kind of demented love story in all of this. All in black and white. Gruesome terror that works surprisingly well in black and white.

This is an extreme film by all measurements. Just like the Japanese Guinea Pig movies this is about pure and utter disgust, bodily cringe and shock. Bloodshock is the first movie of any Guinea Pig to actually make me cringe. There is a scene that involves a kneecap, twined steel and a lot of pain that made want to look away. It serves this imagery with a soundtrack that can be described as a mental patients ramblings put into notes. It gives a constant sense of stress, urgency but also beatuy in a demented way.

If you like really extreme body horror films then this might be up your alley. Be warned though, there is one scene in this movie that was a little bit over the top, even for my blood. This was the best way possible to end Spooktober. See you guys next year and stay spooky!